I Masturbated in My Brother’s House (M/M) 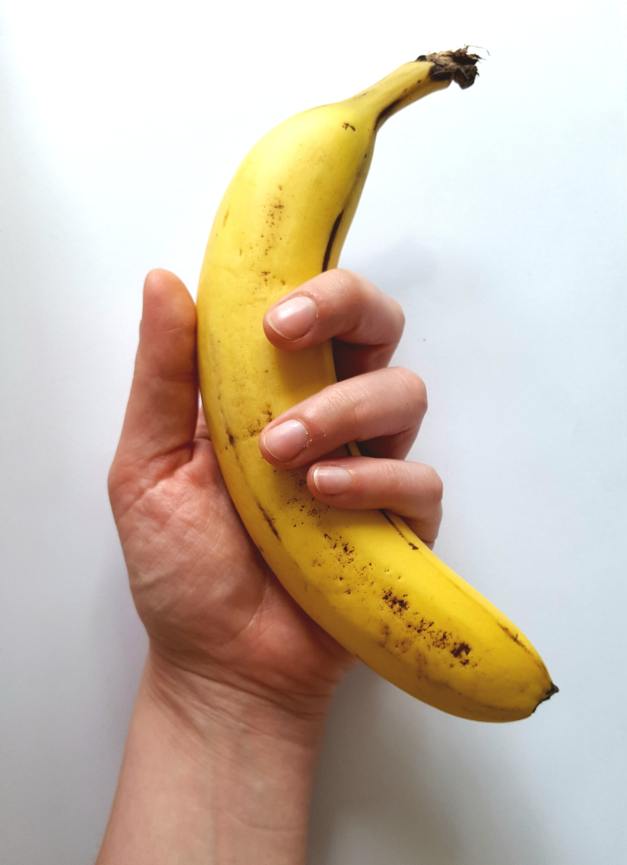 I’ve always had a funny relationship with my brother Patrick.  He always called me “kid” which was guaranteed to piss me off big time.  That and the fact that he was a good ten years older than me.

A few years back he purchased his first house.  In a less than desirable suburb of the city, he really thought he had arrived.  It was a Victorian terrace, with a big railway viaduct down the bottom of the garden.  Being a bit of a gricer, I took pleasure in telling him that it was the line that the nuclear waste trains ran along.  That freaked him out briefly!  His green credentials were seriously dented.  Yes, we were siblings with the traditional rivalry.  Even so, I was happy to help him move in and decorate as I was waiting to start a new term at University.  I stayed for a few days.

Towards the end of my stay, I was enjoying a fine brew of tea and a crafty cigarette as my elevensies break.  My brother had taken the train into town to sort out some things.  I was a bit bored and tired as I gazed idly out of the kitchen window.  I picked up the previous day’s evening paper and scanned through it as I puffed on my fag.  Suddenly, I spat tea out of my gob with disbelief as I started to read an article about corporal punishment and the cane in particular.  It was a hot piece alright, on a subject I’d always had an unhealthy interest in.  In fact, it was so hot that I soon whipped Mr Cock out of my trousers and began to masturbate furiously.  Unfortunately for me, my brother returned just at that moment, unheard by me. Perhaps the radio had drowned out the noise of him opening the front door?

“What the fuck are you doing, kid?” he boomed at me.   “Wanking in my kitchen!  What if the neighbours have seen?  They might think it was me.  Their new neighbour is a wanker indeed!  Shit, I hope they haven’t seen you.  You little sod!  What are you wanking off to anyway?”

He snatched the rag from me.  I blushed a deep red as the penny dropped.

I thought it best to say nothing at that point.  I mean, what could I say?  My mind raced, and I remembered a few smacked bottoms he’d given me when we were younger.

“I can see that you need a good hard spanking now, kid!”

Reluctantly, I made my way up the stairs to the small bedroom I’d been sleeping in.  The fresh magnolia paint gave the room a sunny air.  The window was open to allow the paint smell to dissipate.   I sat down on the bed, feeling for all the world like a guilty teenager.  Soon my brother appeared, smiling a sinister smile.  He unlaced his Green Flash trainers and slipped them off silently.  The meaning was clear.  He was going to beat me with them. 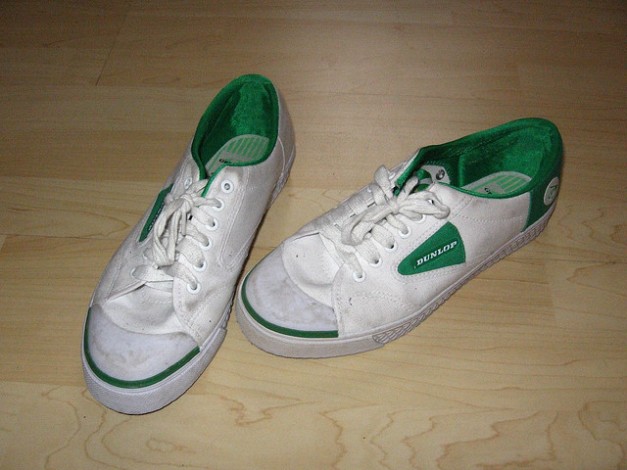 “Better bare your bottom for me, then.  It’s traditional, after all.  Then bend over the bed.”

“Patrick, is all this really necessary?” I asked, in one last forlorn attempt to avoid a beating.

“Oh yes, I’d certainly say so!  That’s it, nice and bare now.”  I slipped my jeans and pants down.  “Tut, tut, carrying a bit of extra weight on your buttocks these days, I see!”

My humiliation was almost complete.  He picked up one of his green and white tennis shoes and slapped it down hard on my naked arse.  An almighty thundercrack seemed to accompany it and a wave of pain engrossed my body.  Rapidly, a second, third and fourth stroke struck home.  Already the pain was overwhelming me.  If my brother was worried about the neighbours seeing me wanking, why wasn’t he worried about the noise from my spanking?   Surely it was drifting out of the open window?  I needn’t have worried though, as just then two expresses passed on the viaduct, drowning out the sounds of my beating.

“AAARGH!” I cried as further strokes lashed my naked behind.  I was close to begging him to stop, but really I was so ashamed of my behaviour that I felt I really had to just grin and bear it.  As further strikes hit me though, this became harder and I soon felt silent tears rolling down my face.  Again and again he hit me, sometimes with the left tennis shoe,  sometimes the right.  My arse was aglow, bright red and throbbing.  Certainly the beating had cured my urge to masturbate.  Eventually it was over.  Patrick slapped my arse gratuitously with his hand a couple of times as I staggered to my feet.

“Don’t think I’ve finished with you yet, kid,” my brother said.  “This afternoon you and I will take the train into town where you will buy a cane, seeing as you have such an interest in them.  You will pay for it and I will use it on you.  Clear?”

I almost forgave my brother later as he cooked us the most sensational Italian lunch.  However, my arse was sorer than sore as I sat on the hard wooden seat of the refectory-style table.  As we enjoyed a cold ice cream dessert from the freezer I wondered whether it might not have been better used to cool my inflamed cheeks.

After lunch, Patrick dragged me off into town on the tube train.  That was a bit of a treat in a way, but our eventual destination bore heavily on my mind.  A place that sold canes?  Surely there were no such places any more?  Then I remembered I’d seen some pretty feeble-looking canes in a local sex shop.  My brother grinned at me as we passed over some uneven points and I grimaced as my bottom was bounced around on the seating.

Eventually, we got to town and emerged from the station.  Almost opposite was our destination, a rather old-fashioned looking shop.  It specialised in umbrellas, hiking and walking sticks and “canes”!  I followed Patrick in, the door causing a loud bell to sound as it was opened.  I was immediately hit by a slightly musty smell as I surveyed the dingy surroundings.  A wizened old gentleman appeared and offered us assistance.

“I’m looking for a punishment cane.  Probably a senior model, preferably with a crook handle,” Patrick informed the man.

“Ah.  Right, sir.  Not much call for those these days, I’m afraid.  Yes, a great shame.  But we do keep a few in stock for connoisseurs and enthusiasts.  Come and have a look.”

Patrick duly inspected a variety of canes, and I blushed every time he swished one through the air.  The stock was rather more extensive than we’d been led to believe, and my brother didn’t seem to be in a great hurry, unfortunately for me.  Eventually, he selected a golden brown specimen, with a quite beautiful curved handle.  It looked as if it was straight out of an ancient comic.  Somehow I knew that it would be no laughing matter, however.

“The boy will pay for it!”  Patrick announced.  I duly scraped the necessary together, which was humiliating, but at least it gave me the chance to ask the assistant to wrap the cane for me.  And so it was that we left the shop, with me carrying a lightweight package wrapped in brown parcel paper!  On the train ride back, Patrick winked at me a couple of times.  Was he enjoying my humiliation, or was he, as I was beginning to suspect, a bit of a spanko himself?

Back at the house, Patrick ordered me upstairs again, “And this time change into your pyjamas.  You will be sent to bed after your caning!”

“But I don’t have any pyjamas with me!”

“I see.  More lewd behaviour!  Extra strokes for that, kid.”

I walked up the stairs with my tail between my legs.  Well, not really as I don’t have a tail.  And, even if I had, I felt that Patrick would have beaten it off in next to no time!

I was sat on the bed again when Patrick came in.  He was taking the wrapping off the cane.  It’s full majesty was soon revealed.  He cut it through the air a couple of times.  I really wasn’t looking forward to this.  Although caning had been a major fantasy for me, I was pretty sure I didn’t want one in real life.

“I thought I told you to get ready for bed?” Patrick reminded me.

“In that case you will be caned in your bed clothes, that’s to say stark bollock naked!  See to it!”

Reluctantly, I stripped off.  I could smell my sweat.  If only his shower had been working.

“No!  It makes twelve of the very best!  Stick that bottom out more!”

CRACK! CRACK! CRACK!  Three shockingly hard strokes landed on my already tender arse.  The sting of that cane was unbelievable.

CRACK! CRACK! CRACK!  It was all too much.  This time tears and snot fell down my face.  I had hoped that the cane from that tired old shop would have been past it, but it was full of youthful vim and vigour.  Shit!

My brother paused.  Perhaps I had struck a chord?

I was amazed.  He’d used my first name!  That was the first time for ages.  Surely a good sign?

“You have done some really good work on the house and with helping me move in.  Thank you.  I shall of course reward you for that.  However, your inappropriate behaviour does still need to be punished!”

He flexed the cane and slashed it down on my naked arse once more.  It wasn’t quite such a harsh stroke, and neither were the other five that followed on.  So maybe I had six of the very best and six close to the best?  Anyway, I couldn’t help sobbing a little by the time he threw the cane down.

“That was fun!” he laughed.

I wanted to call him a bastard but I thought better of it.  And then, he didn’t send me to bed after all.  I think that was because he wanted me to do some more work on the house for him.  I was glad to be standing up as I painted, for my bottom was way too sore to do anything requiring sitting down!

At the end of the stay, he did give me an envelope stuffed with cash.  It certainly helped out over the following term, so I did feel grateful to him.  Despite this, for a while I was reluctant to visit him again.  I was wary of his punishments.  However,  eventually I had to admit to myself that it had all been very exciting, if a tad painful.  So, I did spend a few weekends and holidays in his tender care!  The cane and slippers were used a lot, but only because we both wanted it that way. 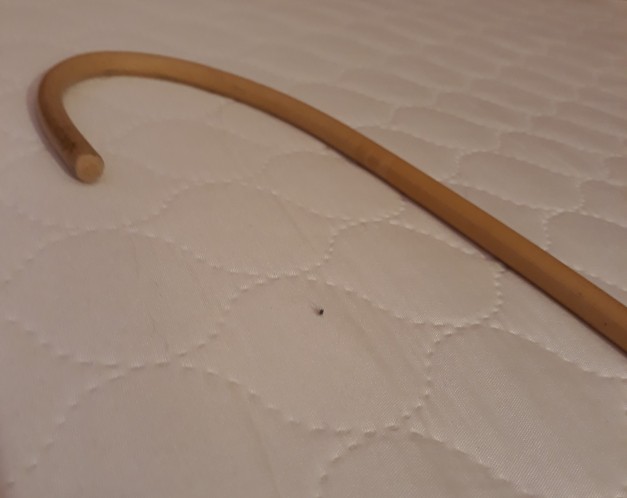 All characters appearing in this story are fictitious. Any resemblance to real businesses or persons, living or dead, is purely coincidental.  All the characters are 18 or over.