A repeat of this hot fiction by your host, Rod Cayenne.  All the characters are aged 18 or over.  Strictly Adults Only!

My local newsagent, Mr Kumar, was such a sweet old thing.  His greying hair and gold-rimmed spectacles betrayed his age, which was probably mid-60s.  He carefully slotted my copy of “Mayfair” inside the “Telegraph.”  He winked at me as he did so, and I handed a crisp new note over to him.  He understood that us men sometimes needed this one-handed reading matter to relieve our domestic tensions.  Indeed, in my case it was being decidedly unattached which made my urges at times overwhelming.

Just as I was about to leave, Kumar pulled me to one side.  “Mr Kemp,” he said, “It’s not my place to judge, but I wanted a word about your son, Robert.”

“Really?  I do hope he hasn’t been stealing stuff,” I laughed, knowing full well that my son wouldn’t do such a thing.

“No, no, bless me, it’s nothing like that.  I just wanted to check his age with you.”

“No, not that either.  Eighteen is good and legal.  You see, he buys adult magazines too.  Rather specialist ones, you might say.  Mainly these spanking ones.”  With that, Kumar pointed a spindly finger at some top shelf titles like Janus, Blushes and Swish!  “An unusual taste in one so young, if I may say so,” he chuckled. 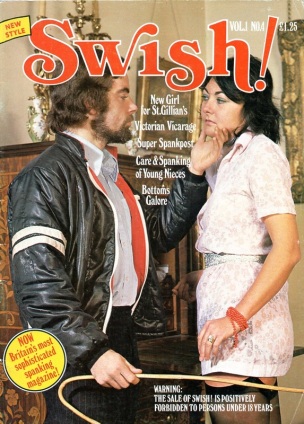 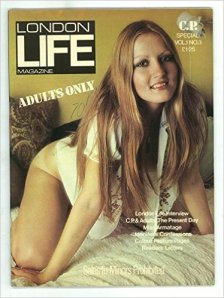 Ignoring his gaze, I picked up one of the titles, actually some sort of readers’ letters edition.  I flicked through and looked at the photos and illustrations of attractive maidens having their bare young bottoms spanked, slippered, hairbrushed and caned.  I swallowed hard.  I really couldn’t see the appeal of it all.

I sighed and placed the magazine back on the top shelf, noticing the exceptionally high price tag on the fluorescent orange sticker as I did so.  “Disgusting!” I exclaimed, probably more from embarrassment than true revulsion.

“I don’t like stocking those magazines, but the wholesaler always sends them, and doesn’t like too many returns.  I’m probably cutting off my nose to spite my face here,” said Mr Kumar, “Because young Robert is one of my best customers.”

“Well thank you for letting me know,” I said laughing, “Perhaps I’ll get my slipper or hairbrush on the case!”

I went back to my old Cortina, wondering what to do.  Was it any of my business?  Was it any of Kumar’s business?  No and no, the answers came to me.  Perhaps I should have let Robert have my back issues, although to be honest I rather prized my collection of Men Only and Mayfair magazines.  I decided to do nothing.  I got home and read the paper, and then proceeded to enjoy my adult reading.  As I spunked over my belly and chest, I started to feel a little bit guilty.  Guilty about knowing my son’s secret, and guilty about my double standards.  Still, there it was.

“Robert!  What the hell are you doing?  In the lounge, of all places!  Give me that magazine!”

Once again, I found myself flicking through what is commonly known as a “spanker,” although this time my interest was more piqued.  Page after page of naughty females being spanked, their arses up in the air, with pretty much everything clearly on view.  Oh yes, this time I could kind of see the appeal.  But that didn’t stop me being a complete hypocrite!  I shouted at my son some more, “This is utter filth!  Girlie mags are one thing, but this sort of depraved thing’s only suitable for the dirty mac brigade!  I was brought up that it was wrong to hit women, so this really sickens me!”

“Sorry, Dad,” was all that my embarrassed teenager could say.

“Have you any idea how much this would hurt?” I asked him, pointing to a graphic picture of a young minx being thrashed on the bare with a hairbrush.

“Well!  Let’s find out shall we?  Go and fetch the hairbrush off the dressing table in my room!”

A minute or so later, he appeared red-faced with the brush in his hand.  I snatched it from him, still fuming at his totally inappropriate use of the front room.

Suddenly I was confronted with the reality of the situation I’d created.  My son was draped over my knees, his off-white Y-fronts on display, and fully expecting to be battered hard with the oaken brush.  I began to have doubts.  But it was too late to stop!  I cracked the brush down hard, again and again, and my son cried out as the blows hit home.  I wasn’t going easy on him, I was so annoyed and so determined.  I cracked the brush down again, and then tore his pants down, revealing a severely reddened hide.  This seemed to encourage me to hit him even harder, and soon the brush was making frantic contact with his bare teenage flesh.  After perhaps twenty more blows I stopped, much to his relief.  I was rather embarrassed about it all.  His hands flew to his bum as he stood up.

“Let that be a lesson to you!  If I find this sort of thing again, I will be getting a cane.  Then we can see how you like that!”  I was shocked by my idle threat, and by the way my latent sadism had surfaced.  “We’ll say no more about it!” I declared, wanting instant closure.

Robert beat a hasty retreat to his bedroom.  I picked up the magazine.  It was called Swish!  I skimmed through the pages.  The content turned me on and I soon found myself wanking in the very same room my son had been jerking in!  I kept the magazine and it made some very interesting bedtime reading.  Needless to say, Robert didn’t ask for it back.

It was a few days later that I bumped into my old headmaster, Dr Dillon.  We exchanged some idle chatter in the street and then adjourned to the Crown Inn for a couple of beers.  The alcohol soon loosened my tongue, and he found out about how I had disciplined my son.

“Good for you!  You did the right thing.”  He gently squeezed my hand, saying reassuringly, “Eighteen can be such a difficult age.”

“I don’t know about that.  I was so annoyed!  I even threatened to buy a cane and use it on him.”

“A cane, eh?  Not a bad idea.  Could help cure him of his strange interest, I suppose.  By the way, call me Dave.”

“Well, Dave, that’s what I threatened him with!  He went as white as a sheet.”

“I’ve got some canes back at my place.  Souvenirs from abolition.  You can have one, if you like.”

“Go on.  I insist.  A good, hard caning is just what your boy needs.  I’ve got a few canes, and I can spare you one.  After all, they don’t get a lot of use nowadays.”

So it was that we ended up at his house.  It was a real tip, which was a surprise, given how he used to lecture us on tidiness and presentation!  We made our way into his dining room, where he offered me a chair.  He disappeared for a few minutes, then came in with a good half-dozen canes.  All of them had that strange curved handle, so familiar to generations of British men.

We talked canes for  a short time.  He told me all about rattan and how it was so suitable for punishment canes, unlike bamboo which could split and break if used in anger.  He swished a few of the canes and so did I.  Then there was an awkward silence.  “Choose one,” he said, “Any one.  They are all much the same.”

I picked the one I’d just been swishing around.  He nodded approvingly, “Yes, a fine specimen that one.  Of course it can hurt like the blazes.  Want a stroke to remind you?”

“Perhaps, I’d better,” I agreed reluctantly and bent over the dining room table.  He let rip with the cane which sliced into my trousers.  “Shit! Shit! Shit!” I cried.

“Hurt a bit did it?” my headmaster asked while laughing sadistically.  “Just one more I think, for swearing.  Get back down!”

Foolishly I bent over obediently.  He let fly again with another scorcher.  This time I held my tongue, but as I rose I felt I had to hold my bottom too!  God, how it stung and ached, and all after only two strokes!

“Well, what did you think of that little beauty?” he smiled.

“Yes, that would certainly teach him a lesson!  I’d forgotten how much a cane can sting,” I admitted, adding “But I’m worried about doing it.  I mean, do I just whack him?”

“No there’s a definite technique to it.  Watch me!”  With that he whacked some cushions and then let me try to do the same.  I soon got a feel for the power of the rattan stick and how to handle it.  Encouraging me, he said, “You have to aim for the middle of the buttock cheek furthest away from you.  Of course what you really need is a real person to practice on.”

“Sorry, Sir,” I said, feeling a bit worse for wear after our drinking session, and with those two cane weals throbbing under my trousers.

“You may be surprised to hear this, but I’m not averse to taking a few strokes myself.  You can practice on me!”

I was astonished.  He couldn’t be serious, could he?  But he was, and then to cap it all, he promptly dropped his trousers and underpants and took my place bending over the dining table.  I shuddered and hesitated as I gazed at the bare male flesh before me.

I lashed a first strike down.  It landed spectacularly, right on the manly, naked target and with a most satisfying crack.  He grunted, and then said, “Good!  You’re a natural!  Carry on.”  The second stroke was less successful, too tentative evidently, as he admonished, “Harder!”  With determination, I then landed four crisp, harder strokes as instructed.  My God, what fun it was!  Moreover, I was strangely turned on, my rigid cock straining within my Falmers slacks.

I was so grateful for that cane he gave me.  I was even more grateful for our friendship.  We met up regularly for caning sessions.  One thing led to another and we ended up bedding each other.  Yes, we became the most unlikely of lovers.

So did I cane my son?  You bet!  Only a few times, sadly, as he became a pretty well-behaved senior teen, on the whole.

I eventually confided in Mr Kumar that I’d caned young Robert.  He just smiled, and then said, “Unfortunately, I don’t think it has cured him, Mr Kemp.  He’s been buying even more of the spanking magazines.  And some of these homosexual ones too!”  He pointed out titles such as Zipper, Him and Vulcan.  I was shocked speechless and then he added, “Forgive me, I didn’t want to cause more trouble.”  But you know, I rather think he did.

All characters and businesses appearing in this story are fictitious. Any resemblance to real persons and businesses, living or dead, is purely coincidental.